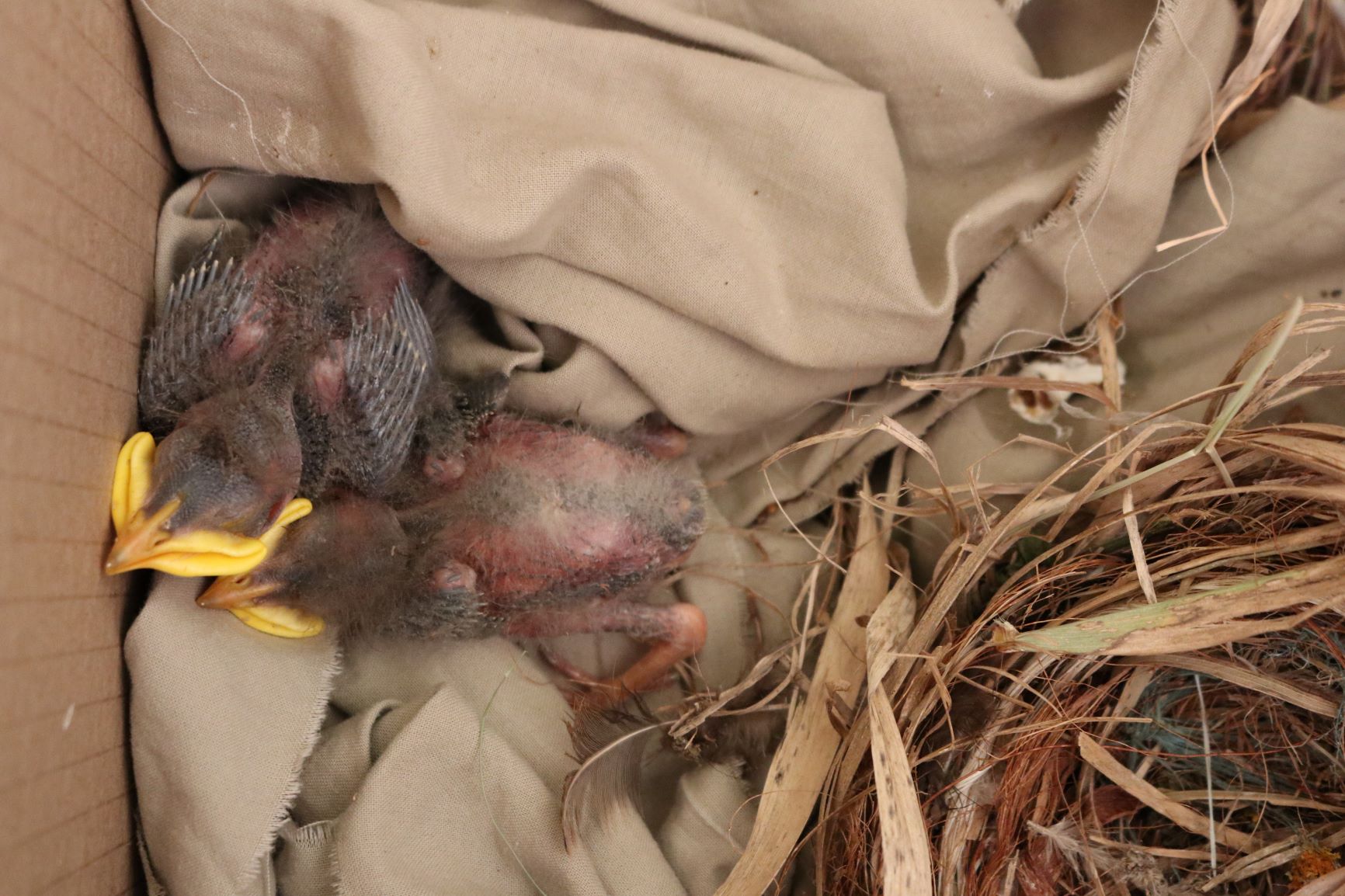 I got a call from a friend to say he had found two blackbird chicks in a bin. In a bin, thrown away like rubbish, alive, nest and all. I felt an anxious urgency and deep sickness on hearing this. I had children to gather and deliver before I was able to go and pick the birds up but then I ran, as if arriving early would make a difference to the cruel fact that someone devalued life so much that they threw it in the bin.

It turns out blackbirds are very resilient. The will to live was fierce. They are noisy and hungry and demanding. And they never seemed to get full. Blackbirds are omnivores, they primarily eat insects but forage fruits and seeds. I fed them meal worms, when they got bigger I sometimes gave them an insect paste which has fruits and oats in it too.

I am always conscious in caring for wild birds to minimize my contact with them to avoid imprinting. Part of me wants to gaze them, fascinating as they are or hold them but I know it is not best for them so I keep interaction to a minimum. Hard with blackbirds I found, they are proactive in their demands.

As they got bigger and grew feathers (remarkably quickly, they sprouted and grew in front of my eyes!) I kept them outside during the day on a platform we built for my daughter in a wild olive tree. There they would hear the other bird sounds and were out there experiencing the elements. Of course they would be missing the parental education in blackbird behaviour. And for all my care I know that this is disadvantages to them in the wild. But I do the best I can to give them a natural upbringing. My best attempt at what rehabilitators of wild birds call hacking.

I read that blackbird young can survive alone from a very early stage in their development. It is a survival mechanism, a trait to protect against predator attacks. Blackbirds often nest low to the ground so can be an easy target for predators. Before it can fly a young blackbird will leave the nest and hop between low branches and will forage for its own food whilst continuing to be fed by its parents.

Unfortunately one of these birds had to be put down. After tending to it for a week it became obvious it was not developing as it should. Its legs didn’t work although they hadn’t initially appeared to be broken. It used its wings to maneuver which seemed ok at first and I hoped it would develop but it didn’t get any better. It was then soiling inside the nest unable to move itself. Blackbirds spend a lot of their time foraging on the floor, a blackbird without legs stands no chance of surviving in the wild. It was a difficult decision to make.

The other blackbird grew big and strong. These were the first blackbirds I had cared for. I am used to swifts and house martins that once they can fly just want to leave. This blackbird did not seem to want to leave. It spent three nights sleeping in the top of the tree but would fly down to me for food when I came. It foraged for food and also ate what I left for it below. I did not anticipate how tame it would become with me as provider, I began to despair that despite my best efforts I had ruined its chances of survival. Then just like that it flew away.