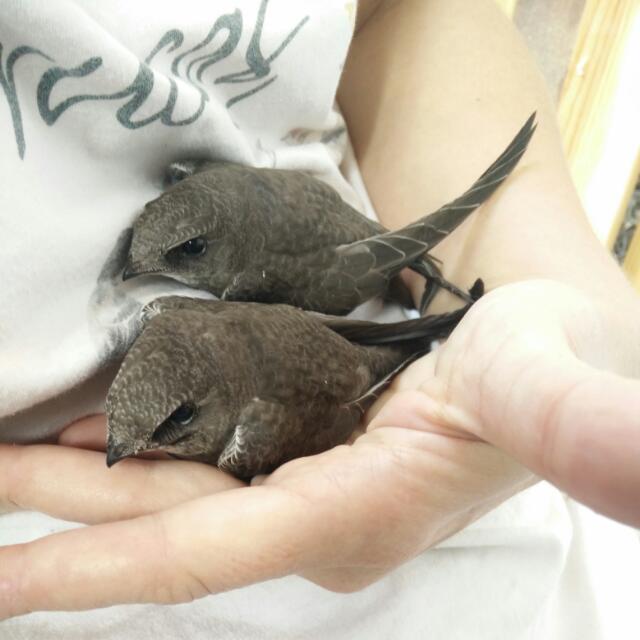 Late August into early September was a strange time. The day we arrived back to Spain from England my daughter suffered stomach cramps which turned out to be appendicitis. A trip to the doctor rapidly turned into a hospital stay which we weren’t prepared for. It was a whirl of a time, 24 hour hospital days, sleeping in a chair and nursing my not so little baby. On the day we were allowed home I took delivery of two swifts from my friend Nando. He had to return to work so didn’t have the time for their demanding feeding. I went from caring motherly mode for my injured daughter to caring for two wild birds in a blink.

Swifts are very special birds and I would come to appreciate this more each day as I cared for them. Swifts spend most of their lives in flight; eating, sleeping and mating in the air only stopping to nest and rear young. Agile fast fliers, they cover hundreds of kilometres a day and are capable of eating almost their body weight in insects each day. They have adapted to nest in urban areas, in cracks or holes in buildings.

The swifts that came to me were found grounded in Barbate. When a swift is grounded they need collecting as it means there is something wrong, they are not like other fledglings that stay close to their nests as they practice flying. If they have grounded they have fallen from their nest or are dehydrated or injured.

I was careful to leave them in peace, I felt so deeply respectful of their presence. My fingers quickly learned to be adept at moving in subtle ways to handle and feed them. In the beginning I was sensitive to insect squashing, my stepson would help me crushing tens at a time so that I could feed them. But I couldn’t always depend on others and I soon became a lethal killer.

The relationship I developed with these swifts was overwhelming. I would wake excited in the morning excited to see them, and though I longed to gaze them always I kept my contact to a minimal. I read and learned about their biology, their behaviours, their migratory journeys, their breeding habits. And more than anything I fell in love.

One day they both flew and were gone just like that.

I felt it in their bodies in the morning. A sort of trembling pulsating. A restless internal energy brewing. Then they were gone. Before I could blink.

These two swifts started me on a journey that I am still travelling. It led to me develop a project to map swift colonies and I have since cared for other grounded birds. I have travelled to see other swift species and became engaged with them in a way that has motivated and inspired me. My heart still skips whenever I see swifts in flight.